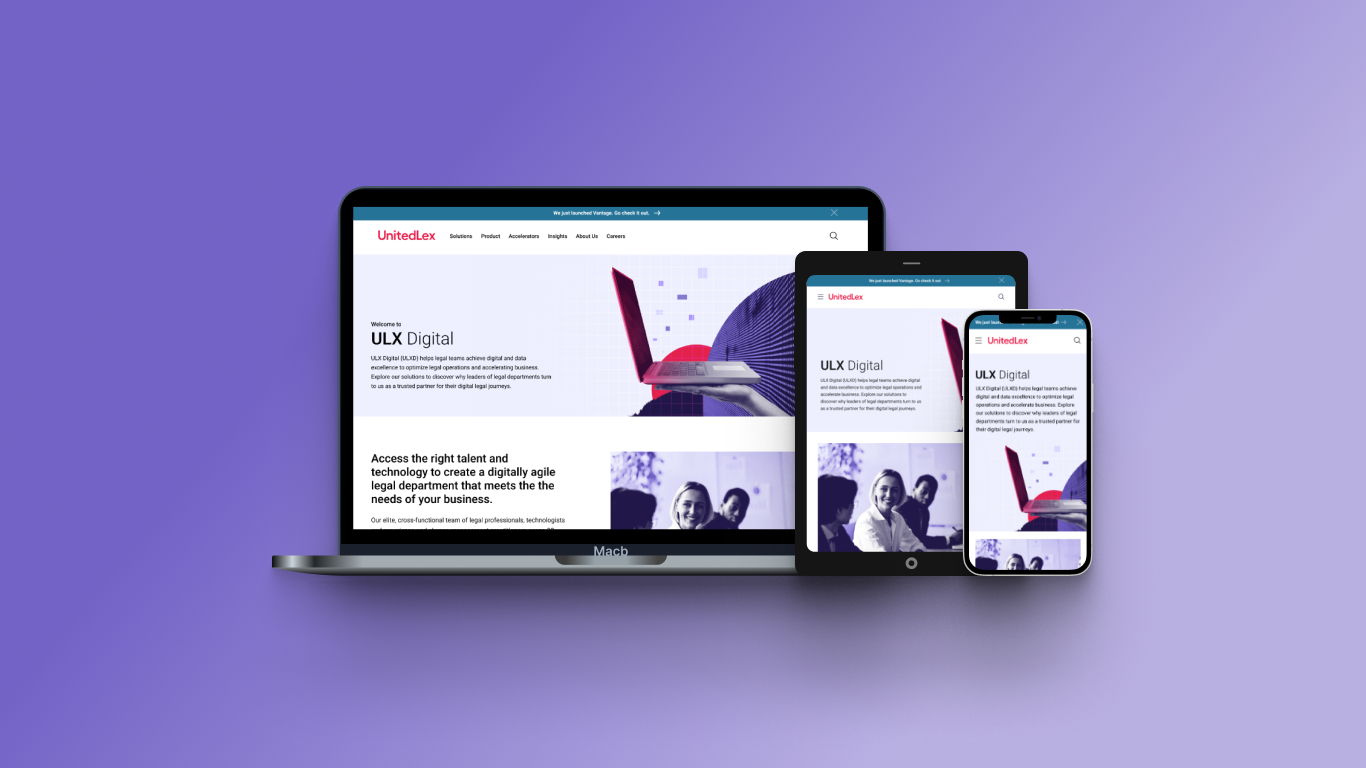 Digital Transformation for the Legal Industry

Our transformation group was being moved over to ULX Digital and I was responsible for designing the homepage to distinguish ourselves as leaders in both legal and digital. The goal was for prospects to think of us when wanting to do anything digitally in the legal industry.

In this project I filled the roles of a Strategist, UX Researcher, Designer, and Copywriter.

I designed the ULX Digital site from the bottom up. I started with information gathering sessions with company leadership and domain leads. I established the site’s information architecture before iterating on responsive wireframes to give prospects a clear picture of the company’s methodology and solutions. Lastly, I established the basic design system and content matrix to facilitate hand off to the developer. 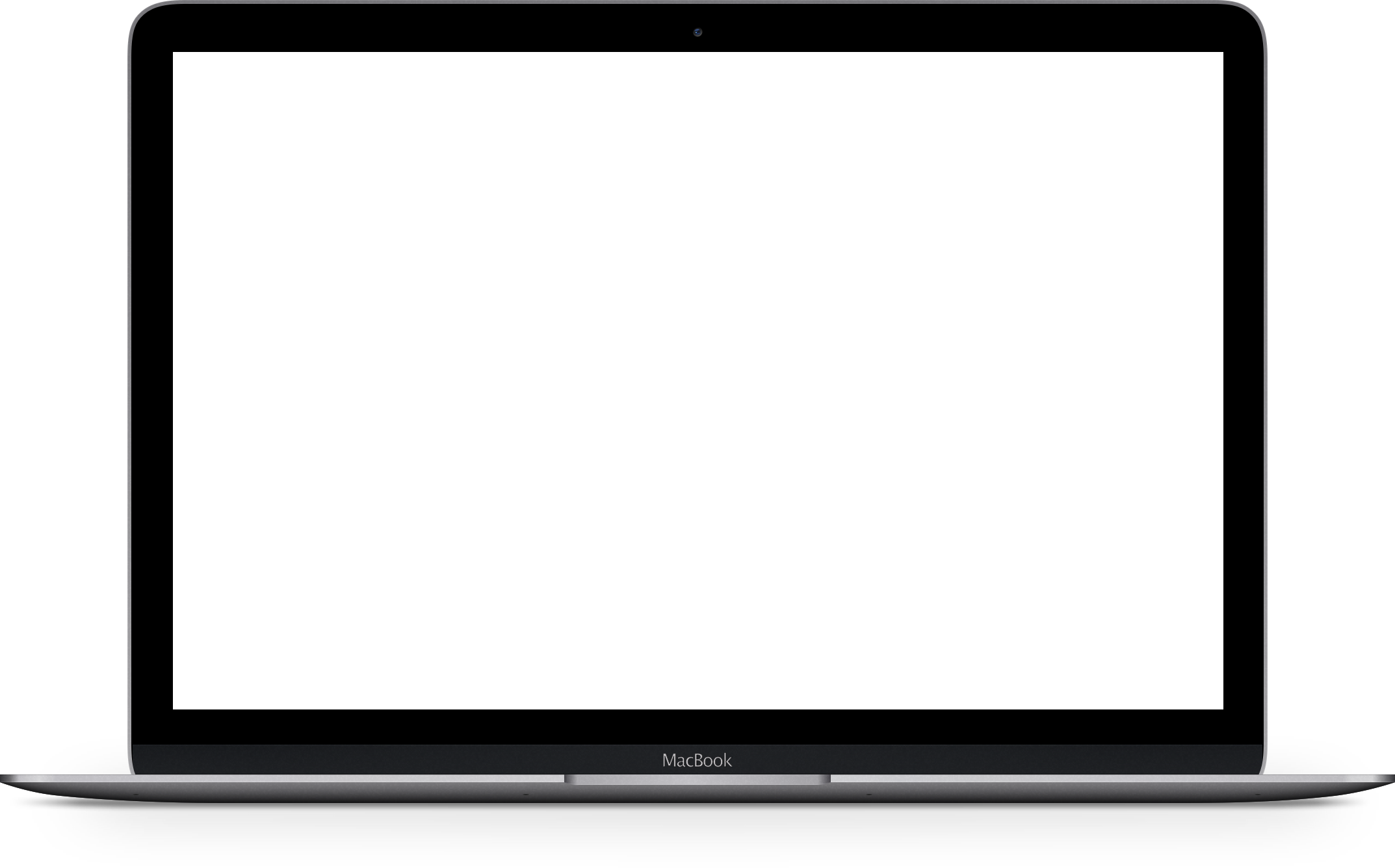 The first step in the process was to learn more about the task. I participated in multiple meetings with both senior leadership and executive leadership to understand the direction that the company was taking. An important part of these meetings was to see how the vision at the enterprise level would trickle down to the service level. The website would need to provide a unified message across all levels within the business.

The main takeaway was that ULX was already providing excellent digital and legal services, but were not being conveyed well to the market. To a lesser but still important degree, it was important to emphasize that we weren’t just another tech company trying to sell our products/services to legal, but a company with equally strong expertise in both legal and digital and could provide much more focused results and services than others in the market.

From there I reviewed homepages from our competitors in order to get a sense of what worked well and what didn't. What I learned was that many of our competitors used very general language that couldn't convey their messaging well. Thus, a lot of focus was put on making sure that the overall story of the site was carefully thought through.

Before working on the website itself, I created a sitemap to better understand the context of the website and how users would move between each page on our overall website. 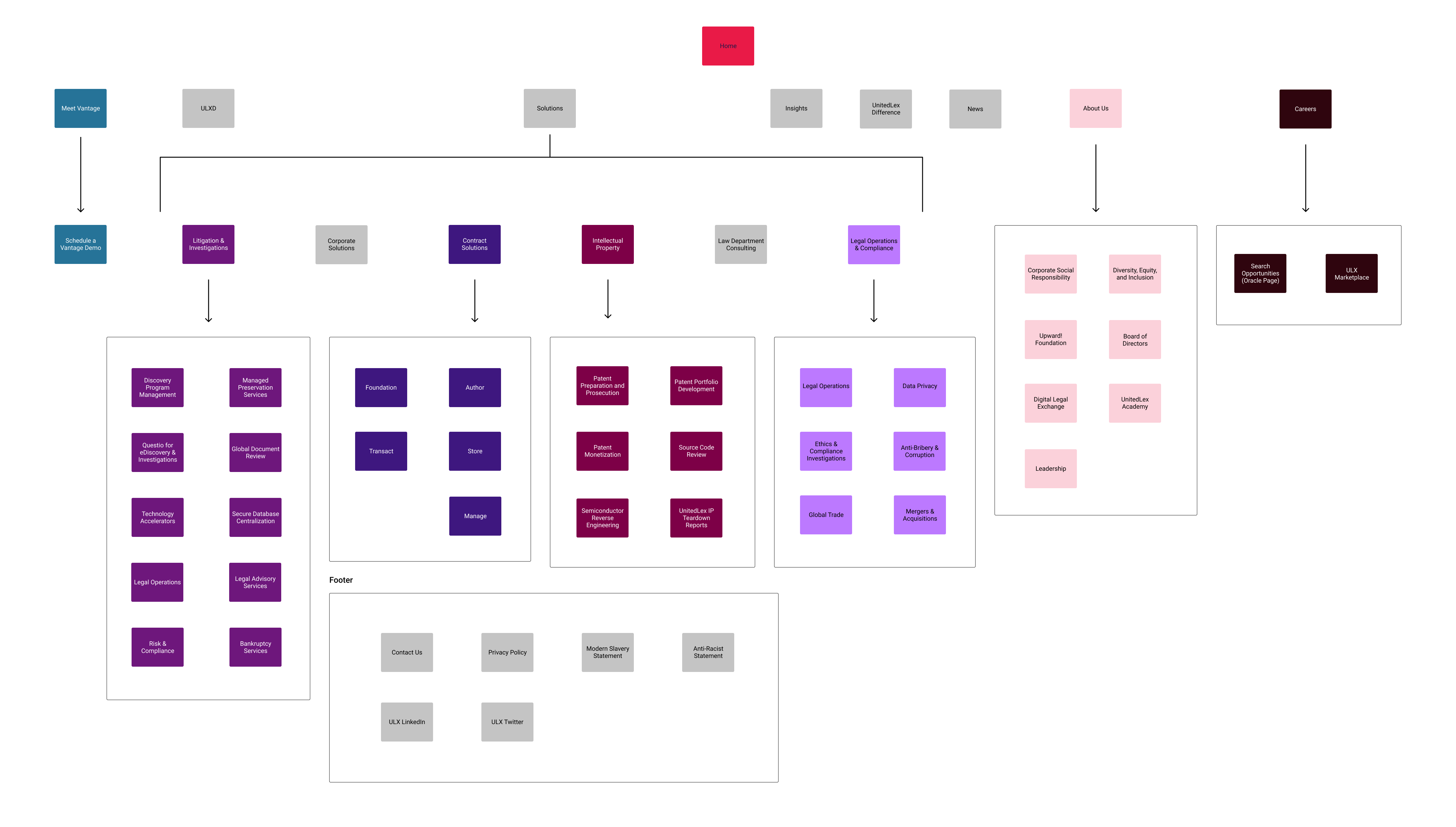 The next step in the process was to think through the website’s storyline. From my previous research I had established that the target audience was the General Counsel (GCs) and others in the legal department who were seeing the day to day problems that the department faced. Since the legal industry lags behind in digital maturity, there was mounting pressure from the C-suite for the legal department to provide value to the business instead of being a cost center. As such, I wanted to focus the storyline a lot more on establishing the credibility of our organization to solve these problems, while also reinforcing the need for change in their organization. The basic story that was established was:

Once the story was established, I started to work on wireframes using a lot of what I had learned from the initial research stage. 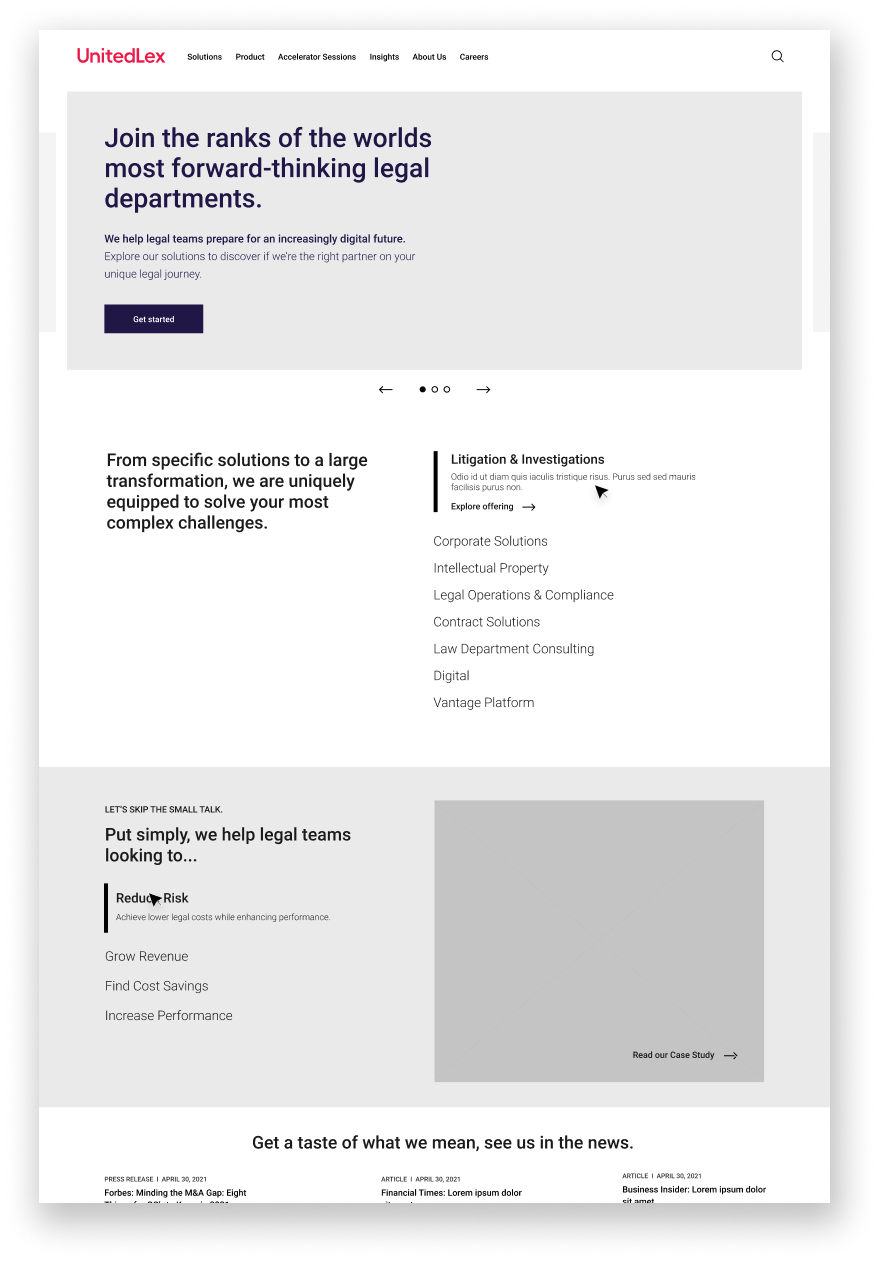 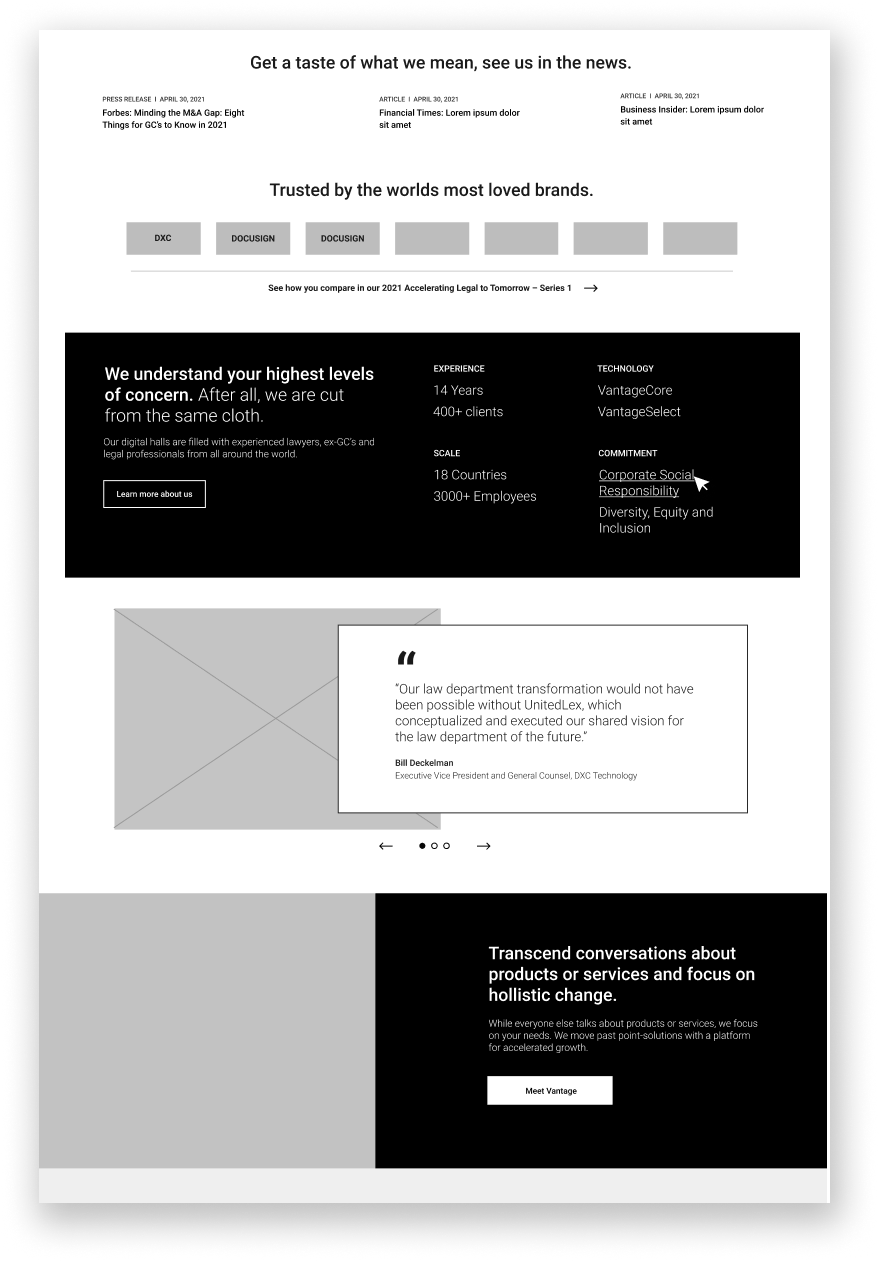 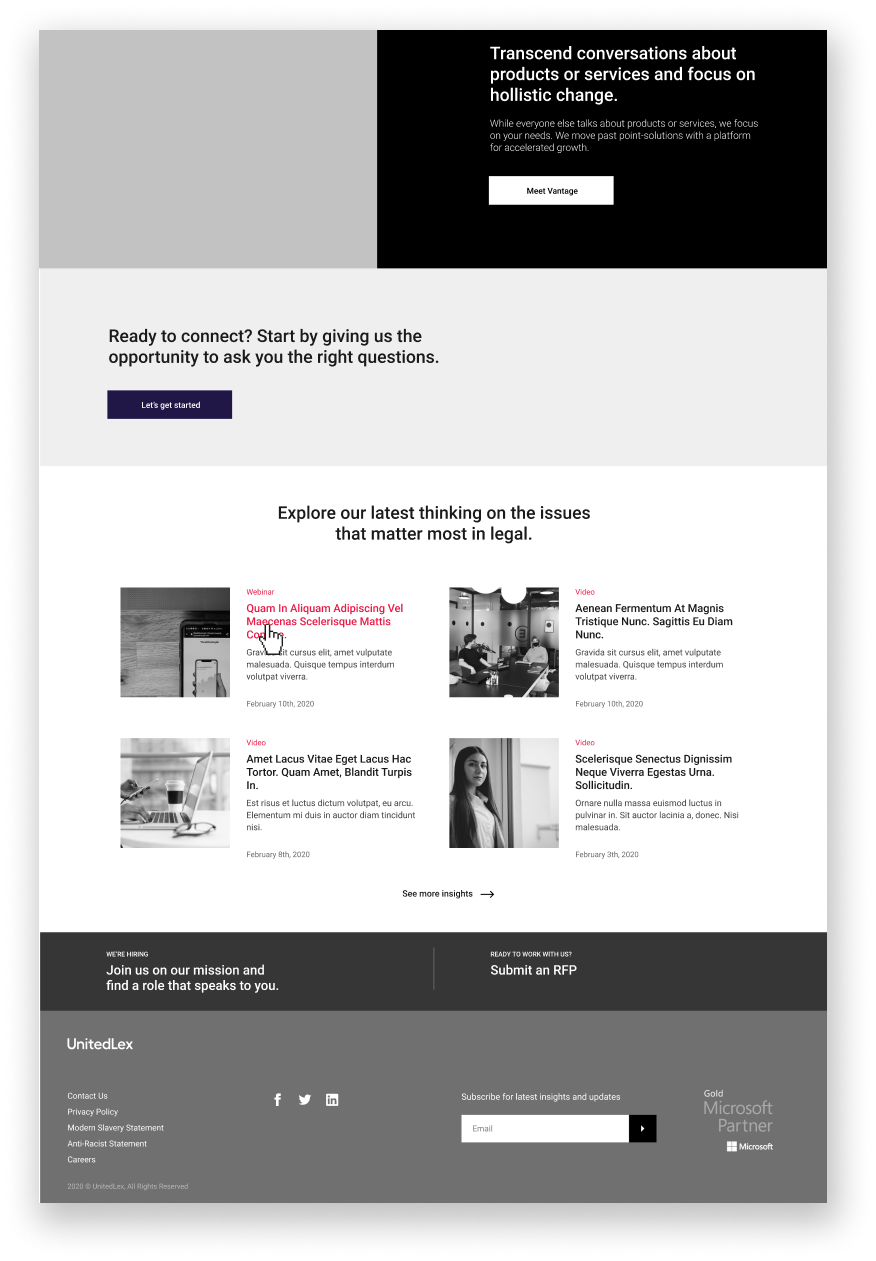 The next step was to increase the fidelity of the designs and bring in a lot of the existing website components. 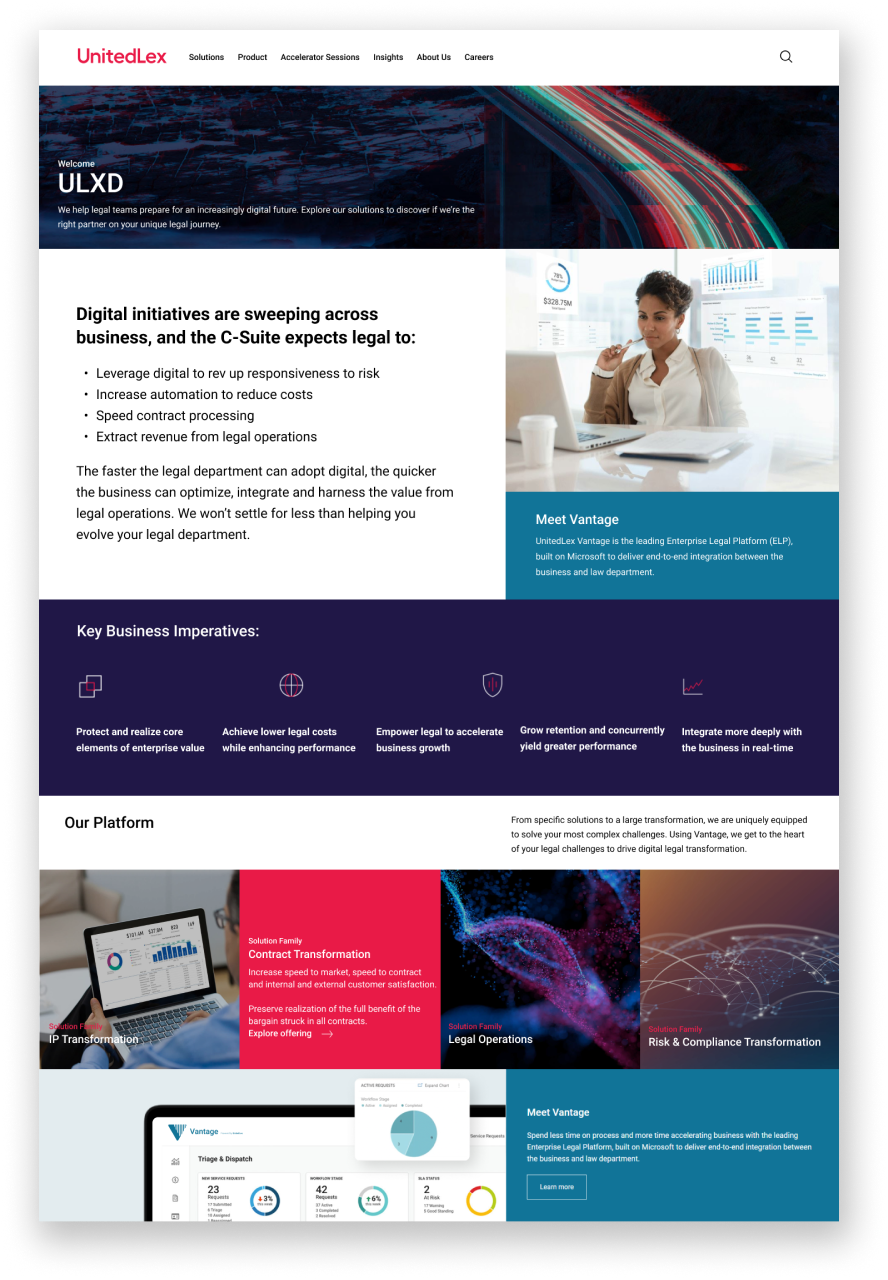 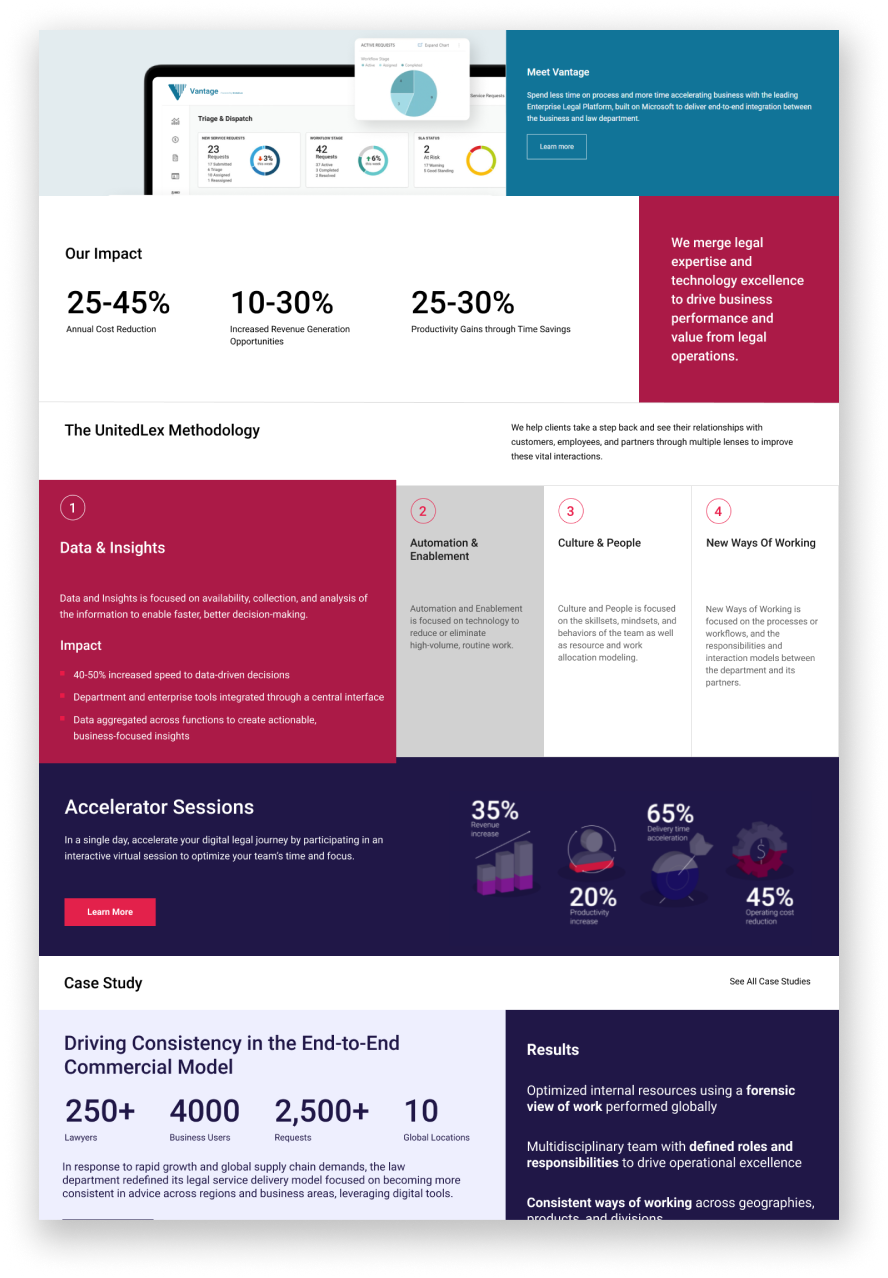 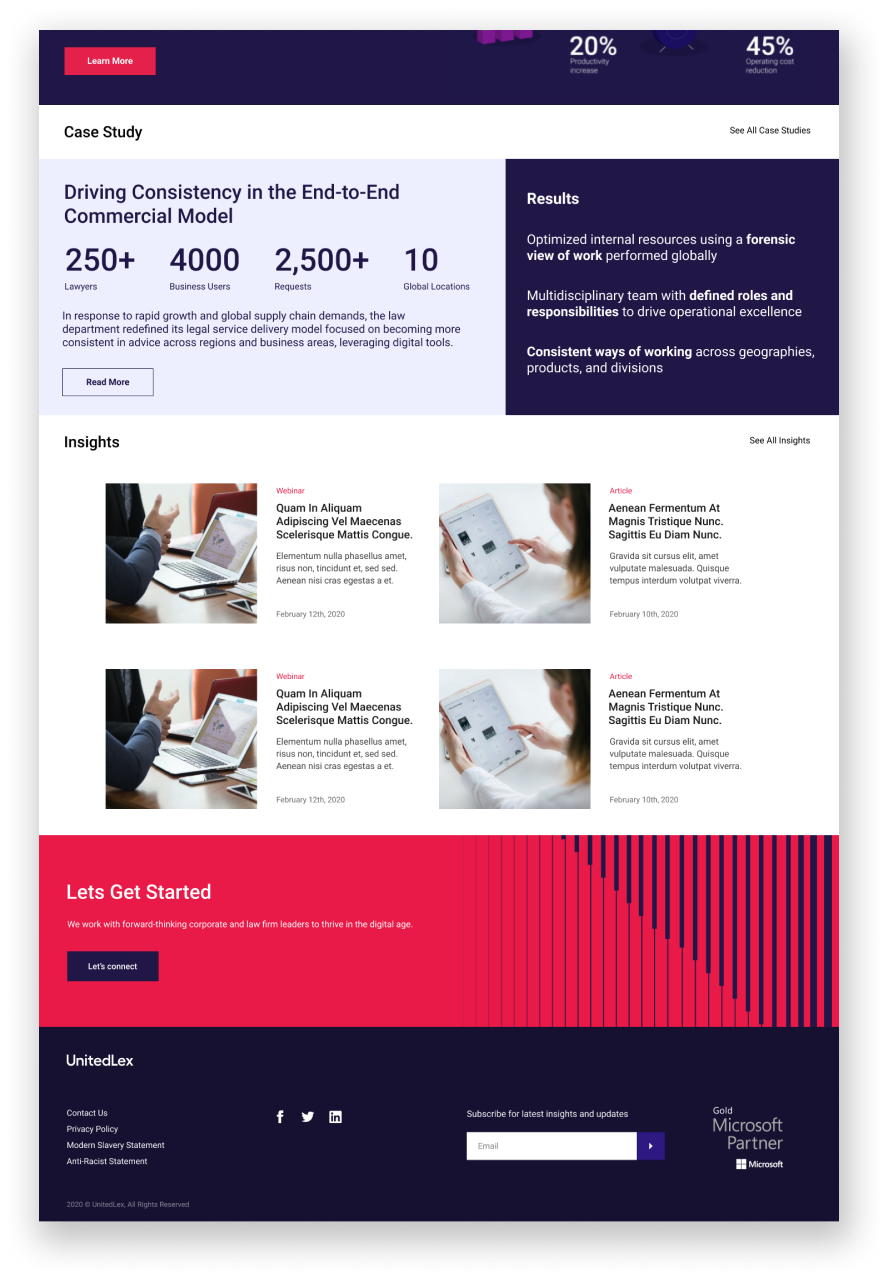 However, it became quickly apparent that it would be difficult to effectively tell the story I had crafted previously. In collaboration with the developers, we were able to take the existing modules and elements and make styling changes instead of creating completely new modules from scratch. This helped save time and money while still allowing some freedom in my designs to tell the story as best as I could. 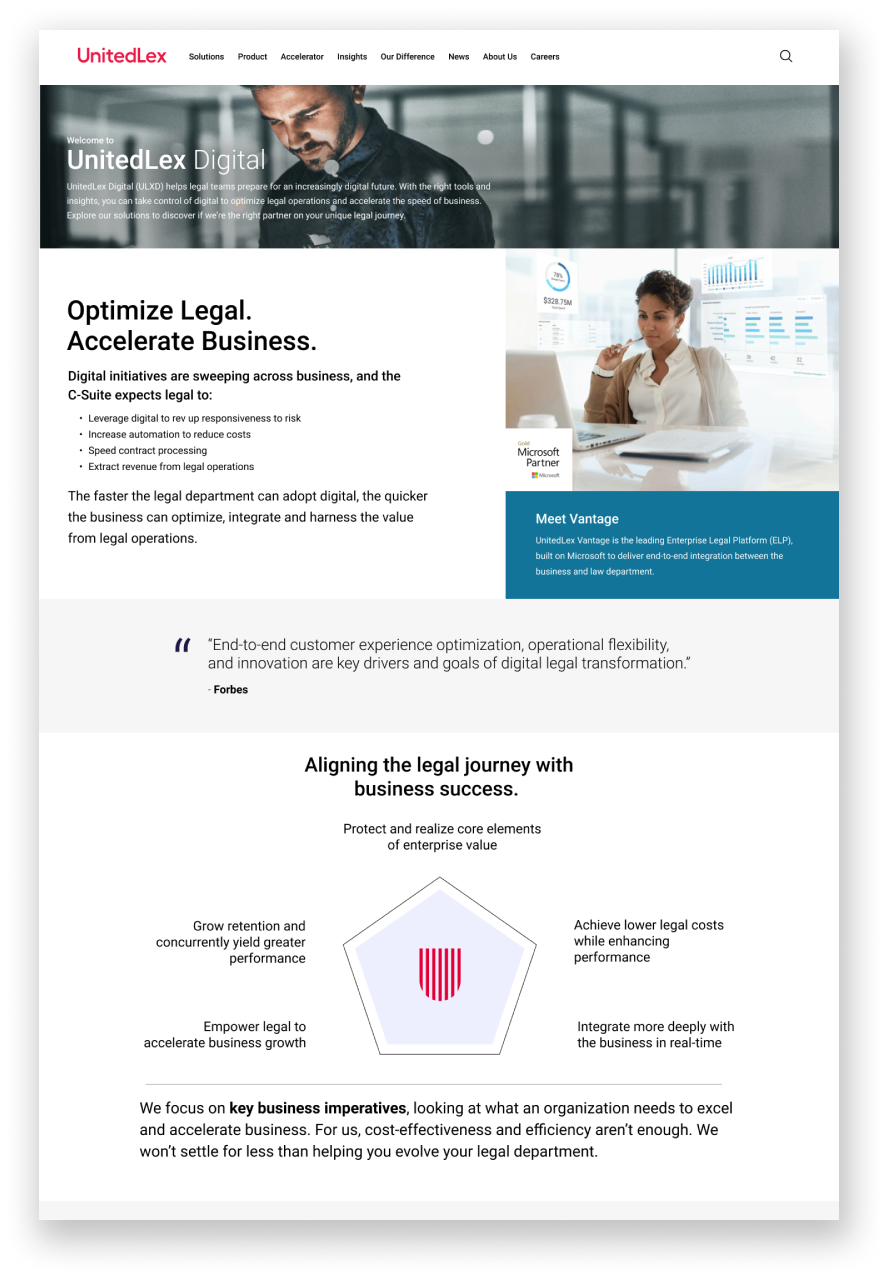 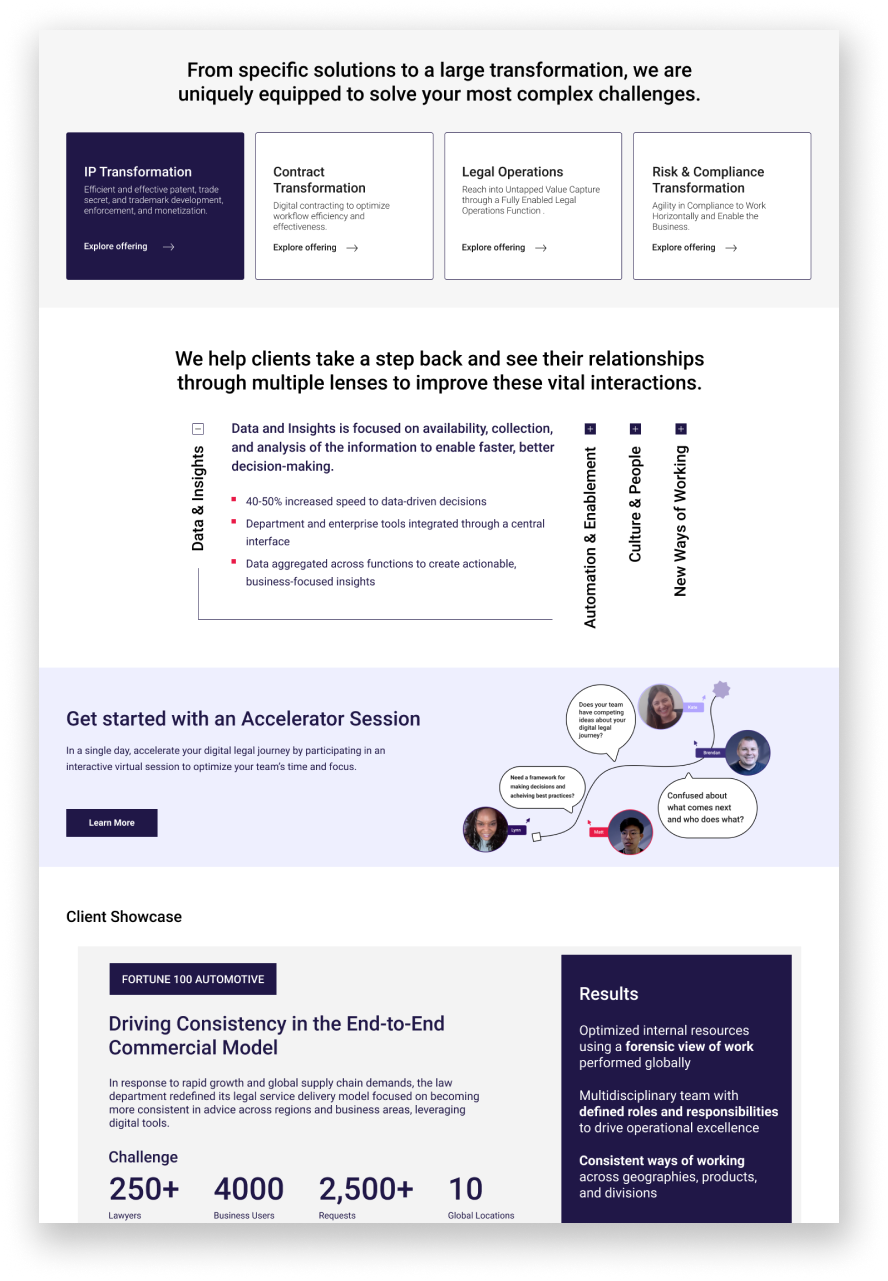 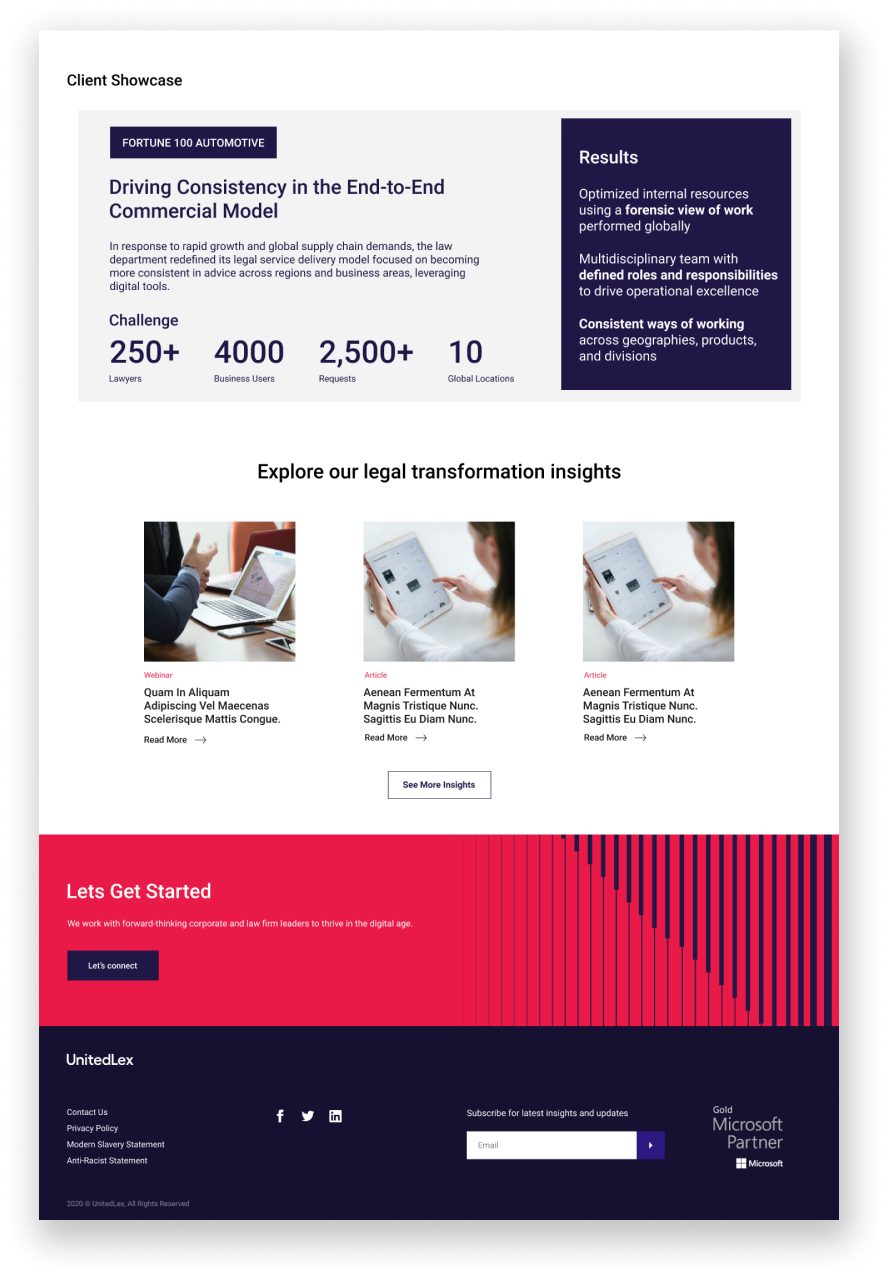 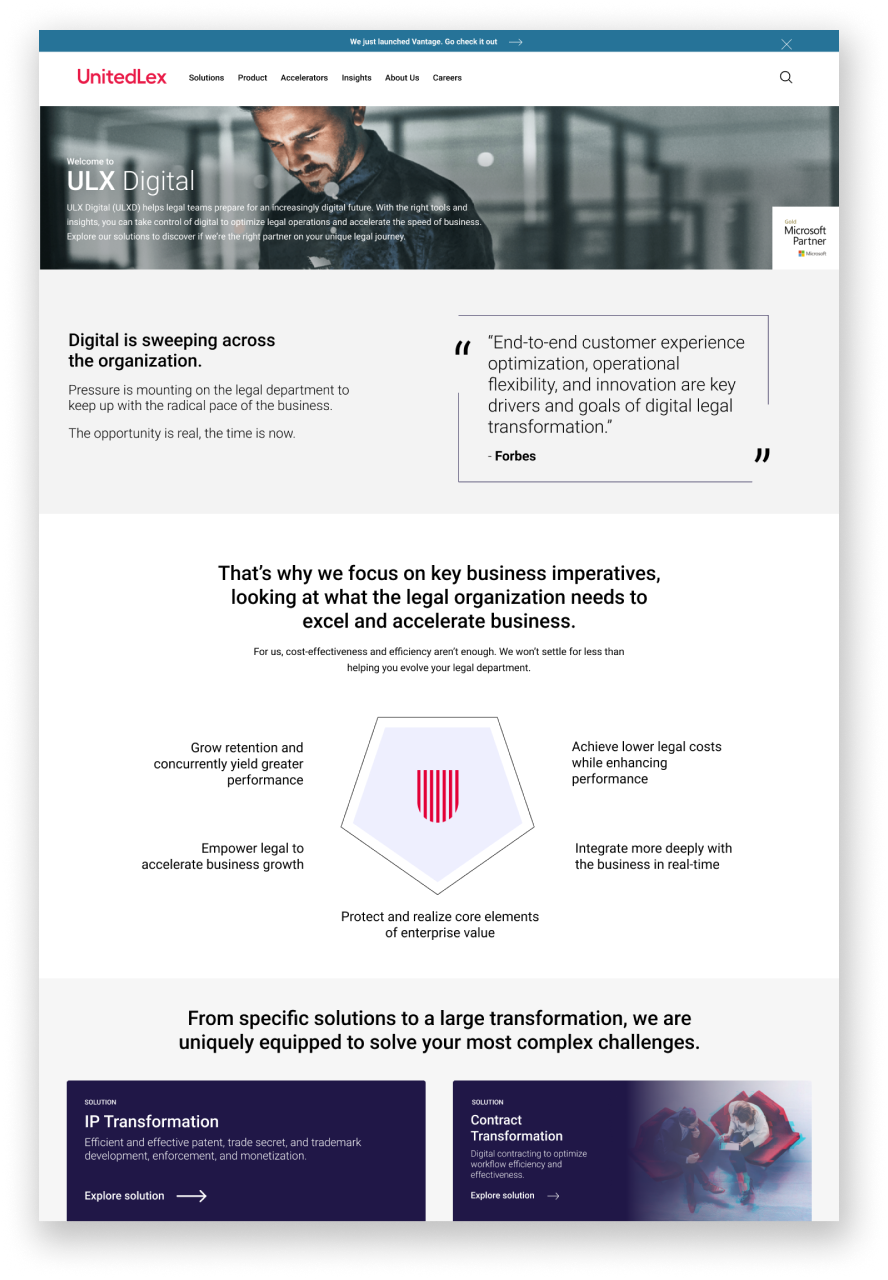 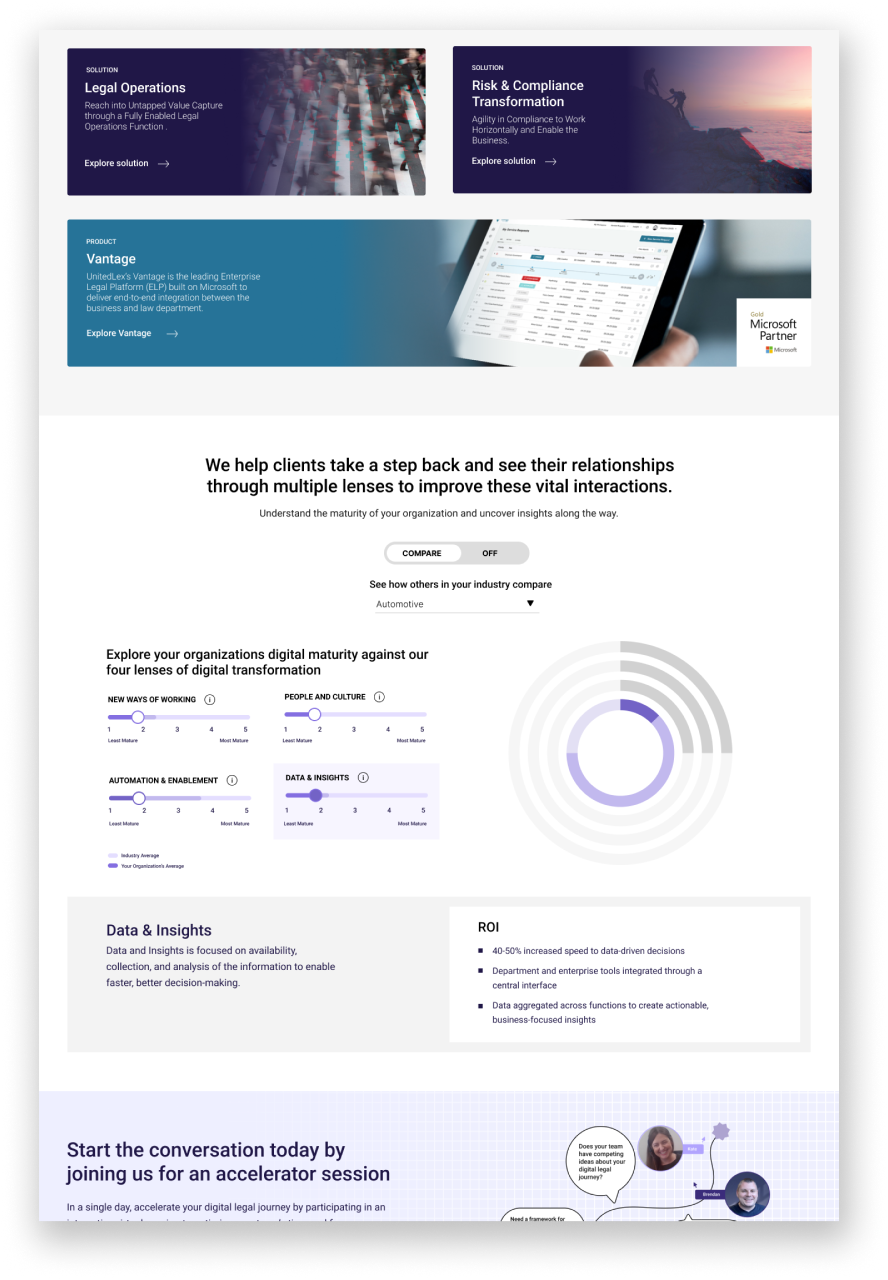 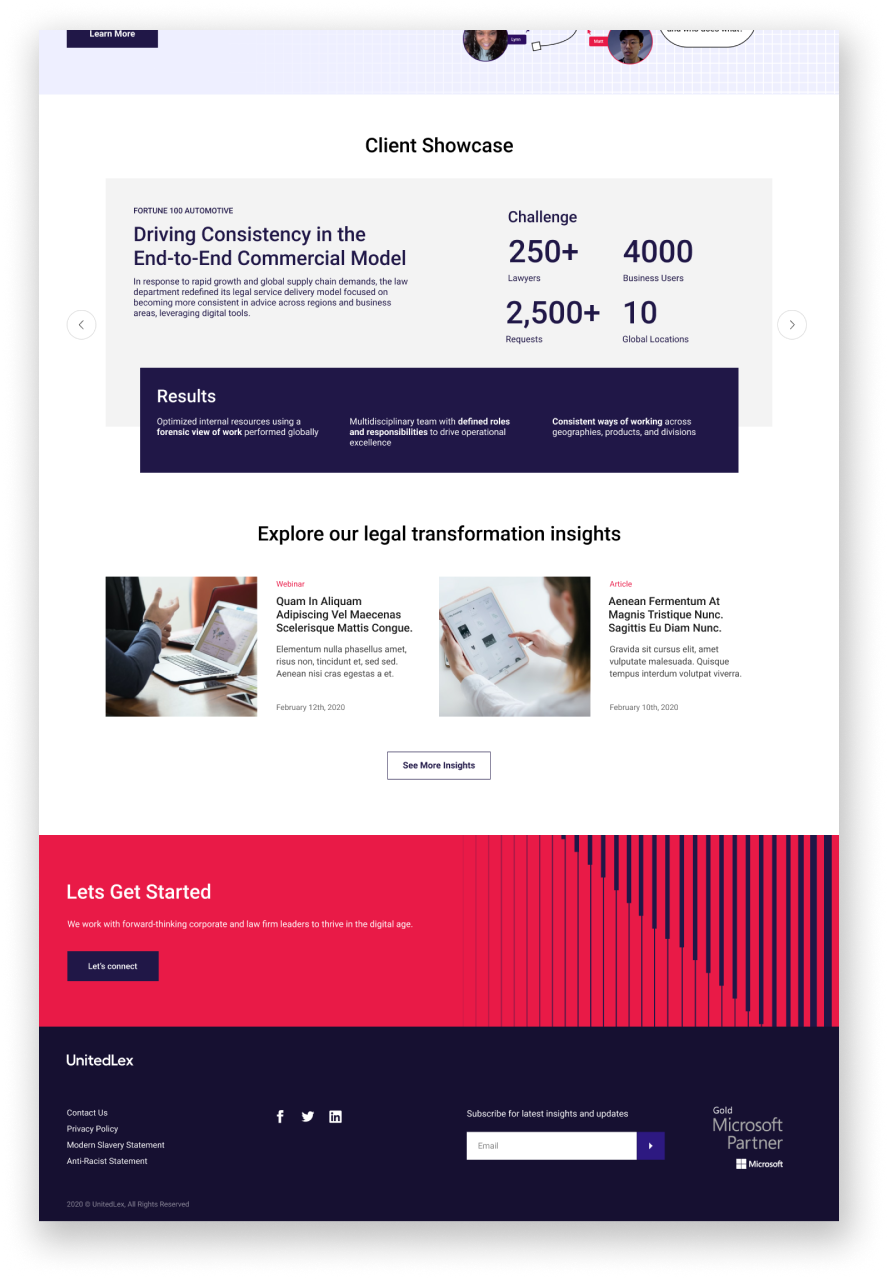 Another challenge was being able to effectively communicate the four pillars of digital transformation that our solution offerings followed. Since this was the core foundation of each of our services, it was critical to make this part as clear and understandable as possible. 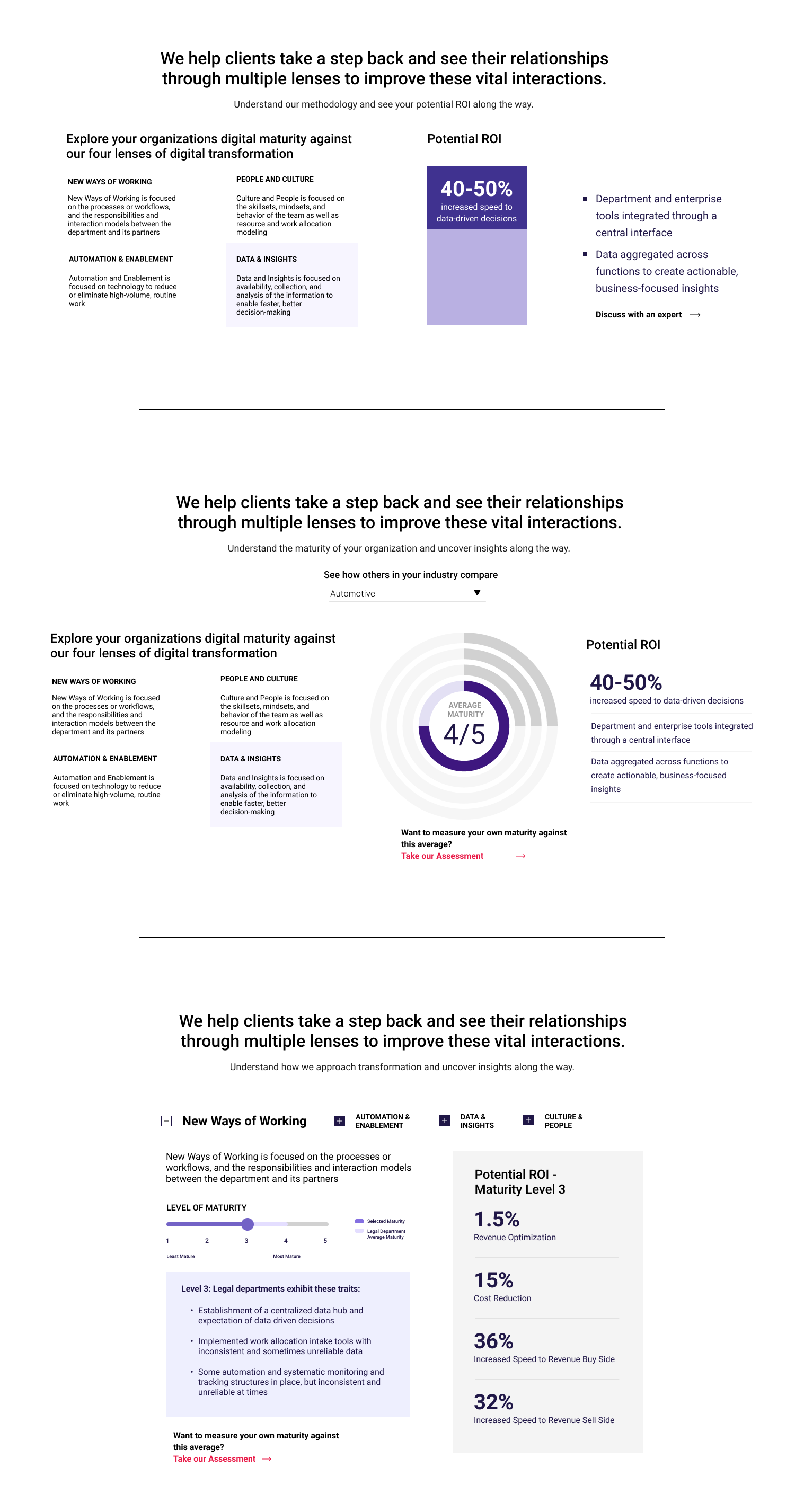 Based on my initial research, the final design took into account that our target audience wasn’t yet comfortable with digital transformation. Therefore it focused only on the important information that they would be able to understand. Overwhelming them with too much information would make potential prospects less likely to reach out.

Since I had already been collaborating with the developers in creating some of the custom modules as well as working within an already established system, the handoff went more smoothly than initially anticipated. While I helped establish some basic guidelines, the new designs were built within the existing system, there weren't many significant changes.