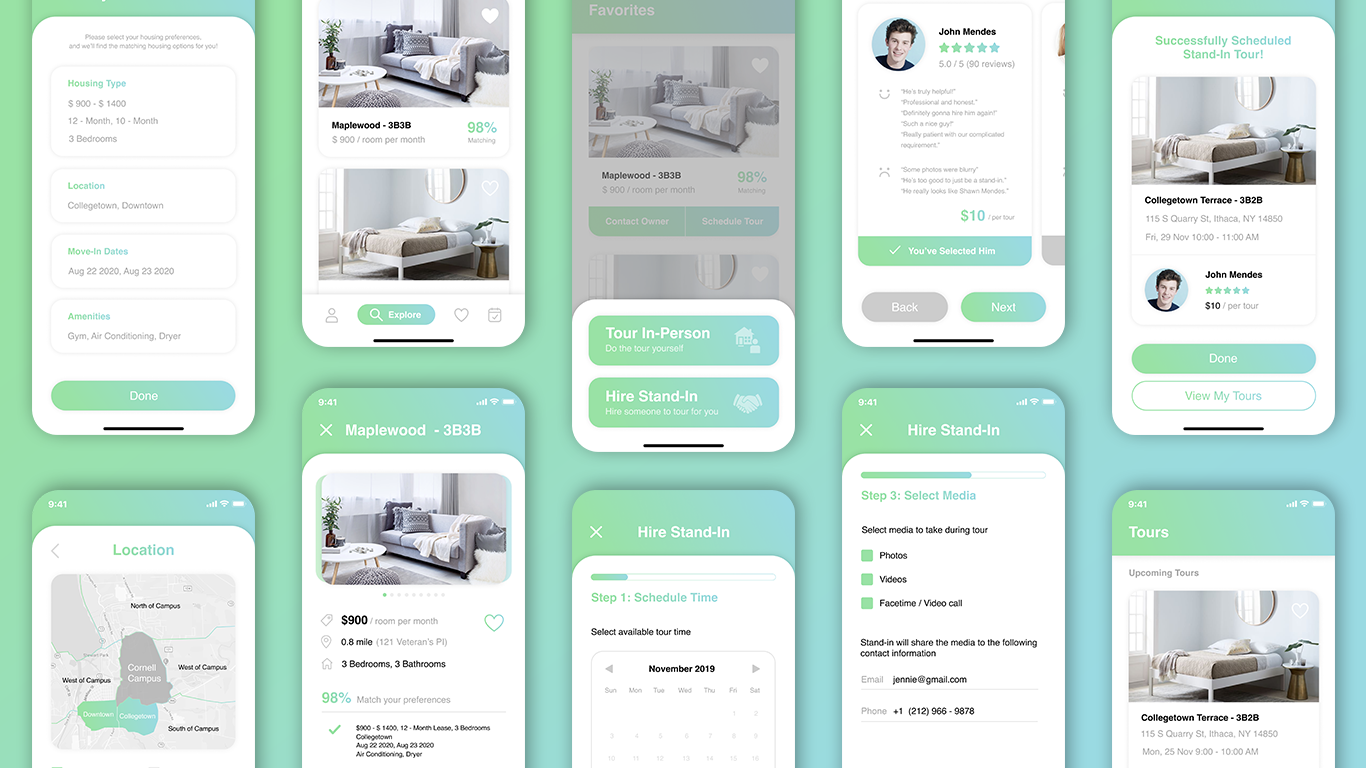 Housing is only guaranteed for two years for Cornell students. After that, it is up to the students to find housing for their junior and senior years. However, there aren't that many resources for students to use in order to find housing near campus.

Since information is difficult to find online, students must meet with the landlord or realtor in person, but the majority of offices close at 5pm, when many students still have classes or extracurriculars. On top of all this, the majority of housing options are taken within a few months of the beginning of Fall Semester, adding more stress within a limited time frame.

As a team, we designed the app House Scout to help students find housing options that fit their preferences and assist them in scheduling in-person tours, as well as hiring someone to tour for them.

While each of the group members contributed to every aspect of the project, I focused more on the research and wireframing aspects of the process. This includes the user research, interviews, and wireframes from paper to high-fidelity prototypes.

This app is mainly targeted at sophomores, juniors, and seniors at Cornell University. Sophomores have guaranteed housing, so they would depend less on the app, but nonetheless some choose to live off campus. Freshmen, however, are required to live on campus so the app would not benefit them. In addition, this app is designed to be used by Cornell University students in particular, so it may not be applicable at other universities.

Once we had established our target audience, we set out to interview the very people our app was being designed for. We interviewed 7 students, from sophomore year and older, asked them about their past experiences with the off-campus housing process, and what their ideal process would include. I was responsible for interviewing or taking notes for 3 of them. From those interviews, we created an affinity diagram, pictured below, and came up with the following takeaways: 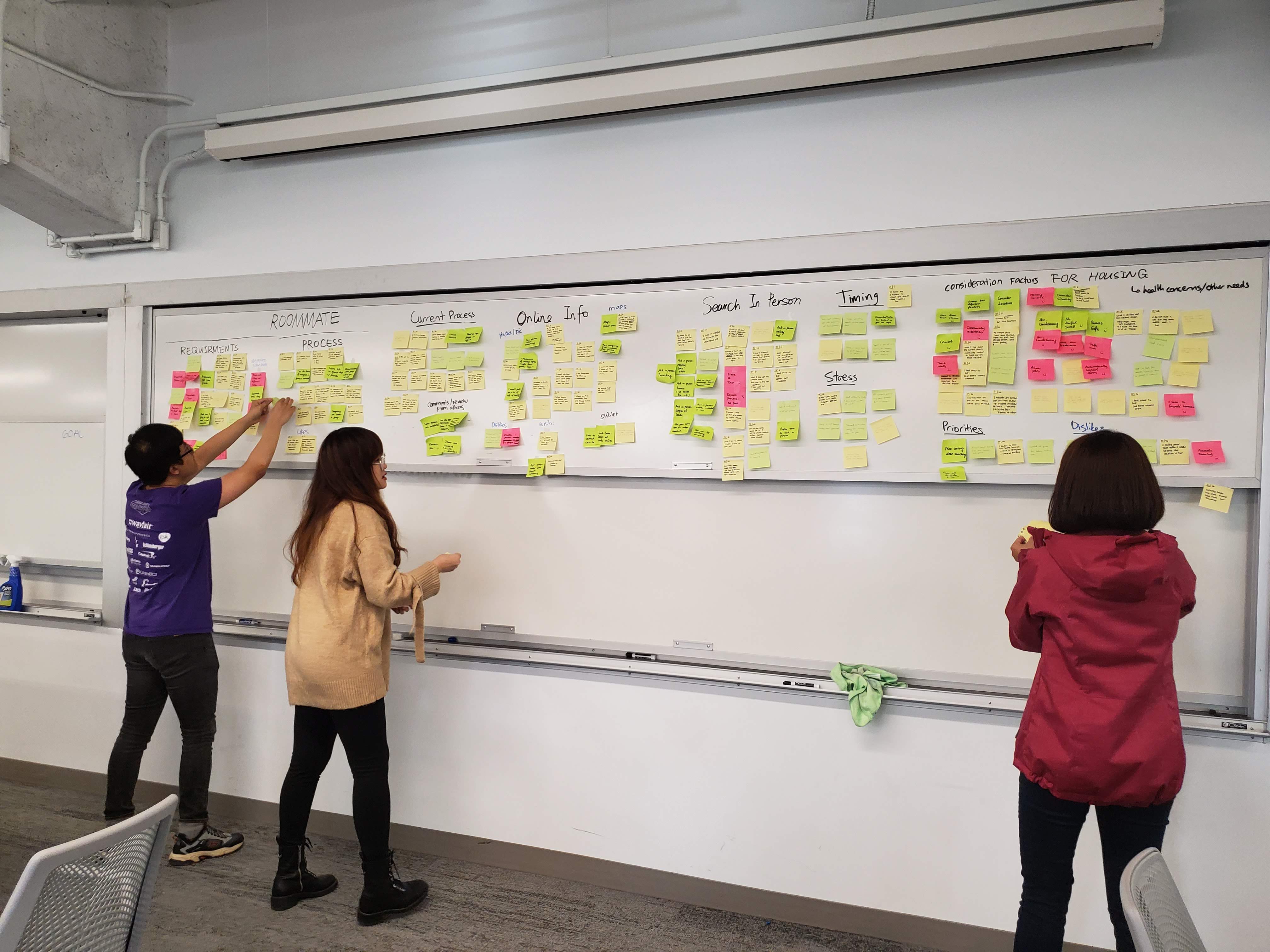 From our user interviews we developed the following persona: 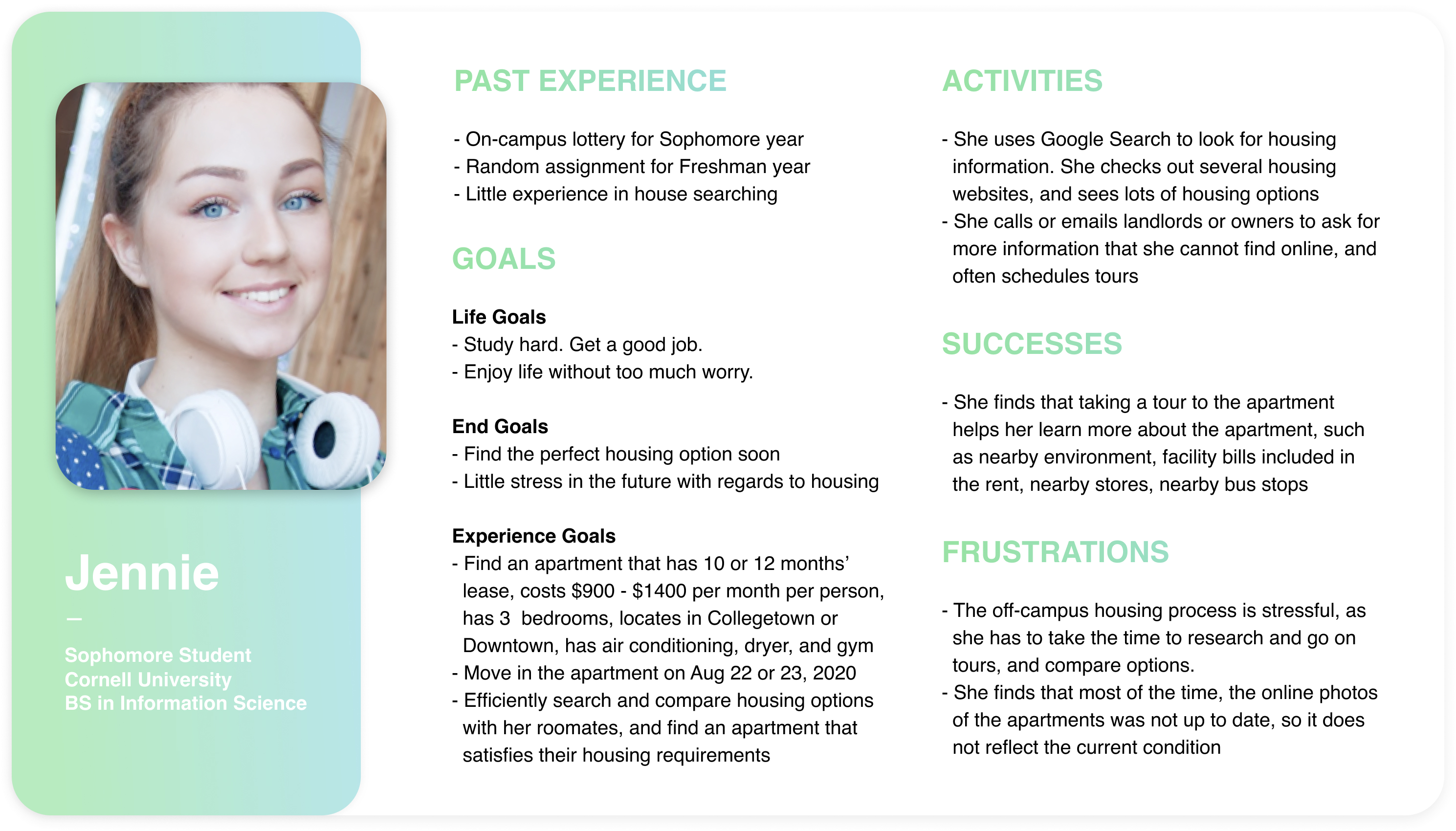 Evaluating the Existing Solution Space
Before coming up with ideas, we needed to first evaluate the current solution space. This way, we wouldn't make a copy of an existing product, and could also learn from them. After doing our research, we listed the things that they do well and where they fall short. 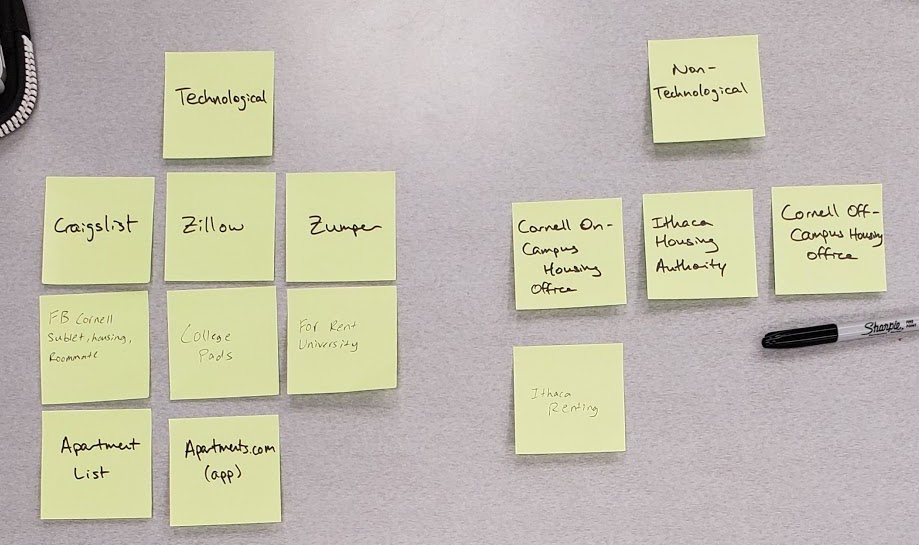 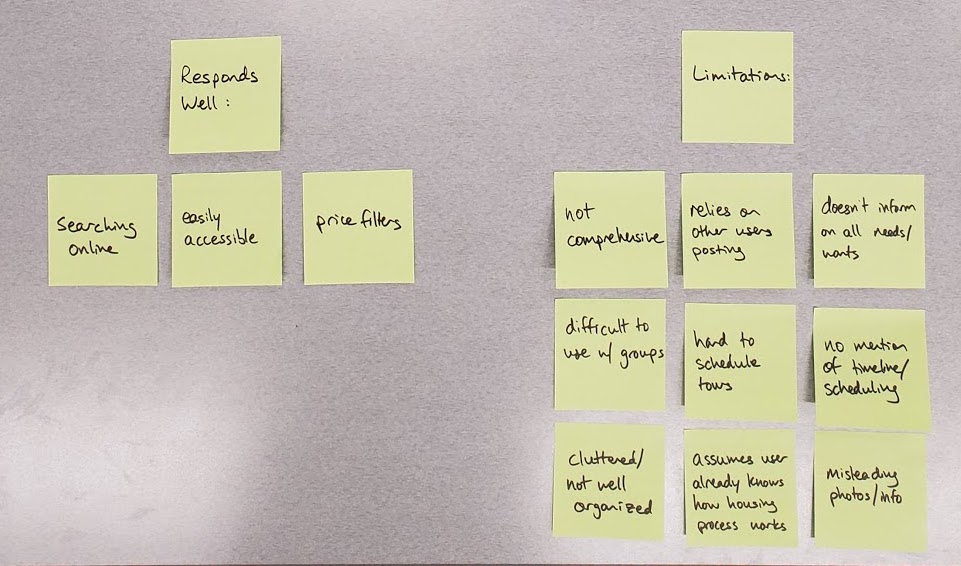 From our research, we found out that while sites like Zillow or Craigslist worked very well in big cities, they could not meet the needs of Cornell students in particular. The majority of housing found on these sites were located in downtown Ithaca, whereas the majority of off-campus students live within a 5 minute walk to campus. Our product aims to reach this area directly surrounding the campus.

Brainstorming
Following our analysis of the existing solution space, we began brainstorming various ideas for our product: 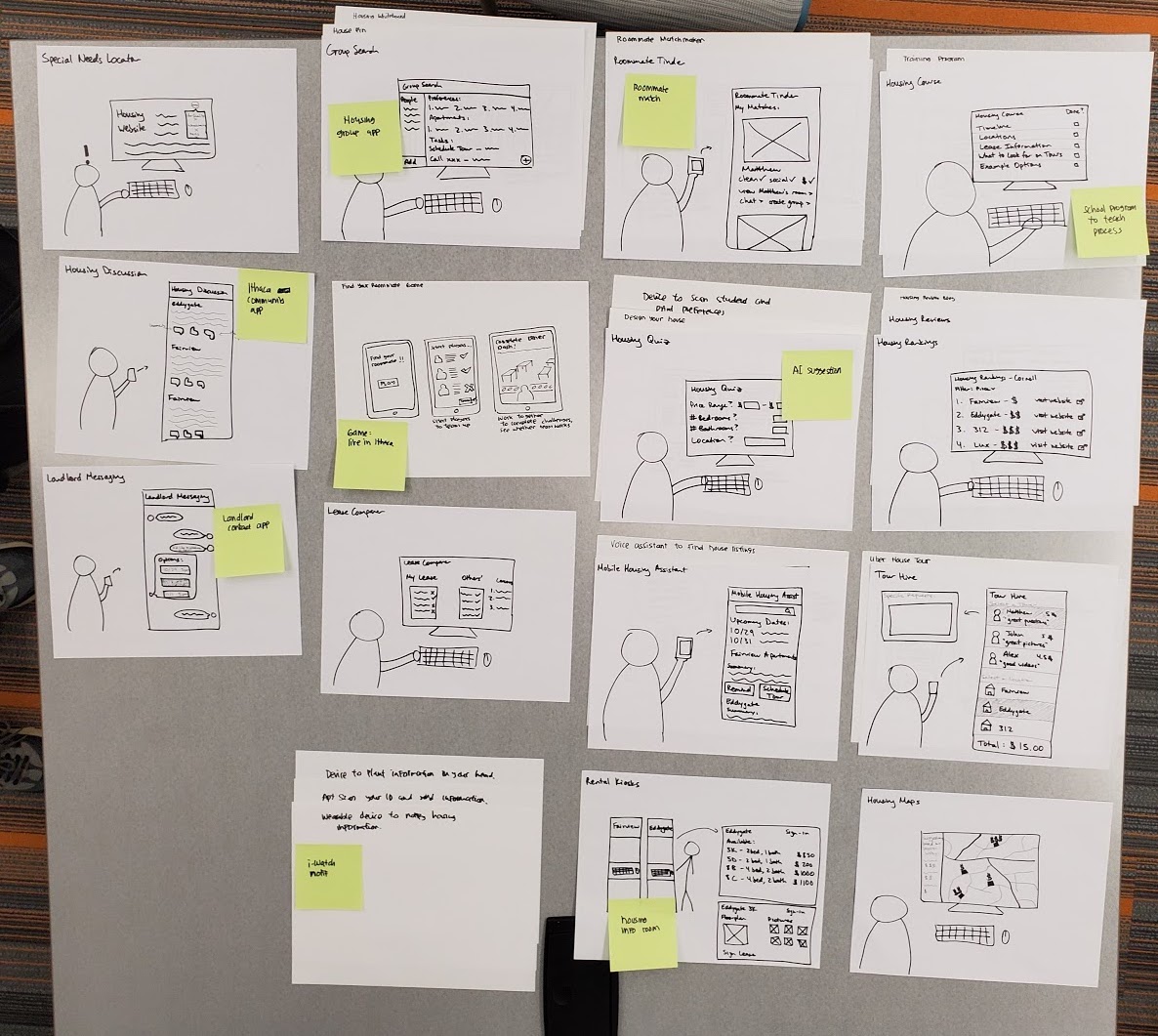 Sketches of Tech and Non-Tech Solutions

Chosen Solution
Our chosen solution combined two of the most important features we had come up with, a way to search based on preferences and a way to schedule tours. From there we were able to establish the following 3 main tasks: 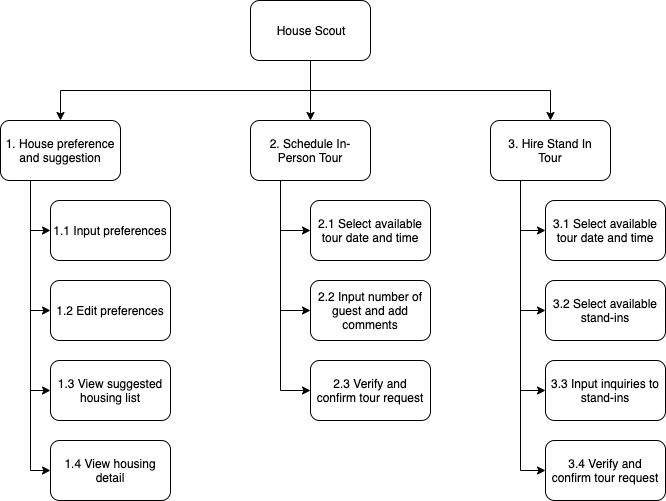 Stand-In Tours was an idea that I thought would distinguish our app from other competitors. Nearly all the people we interviewed placed a lot of importance on being able to tour and see the property first, and mentioned difficulty scheduling tours due to various logistical obstacles. This feature gives the opportunity to pay someone else to tour in their place. While not perfect, this would allow for more insight than what could be gathered on the website alone.

Once our idea was finalized, we sketched each of the tasks in our app. Since I was the one who came up with the Stand-In Tour idea, I was in charge of sketching and storyboarding those tasks. 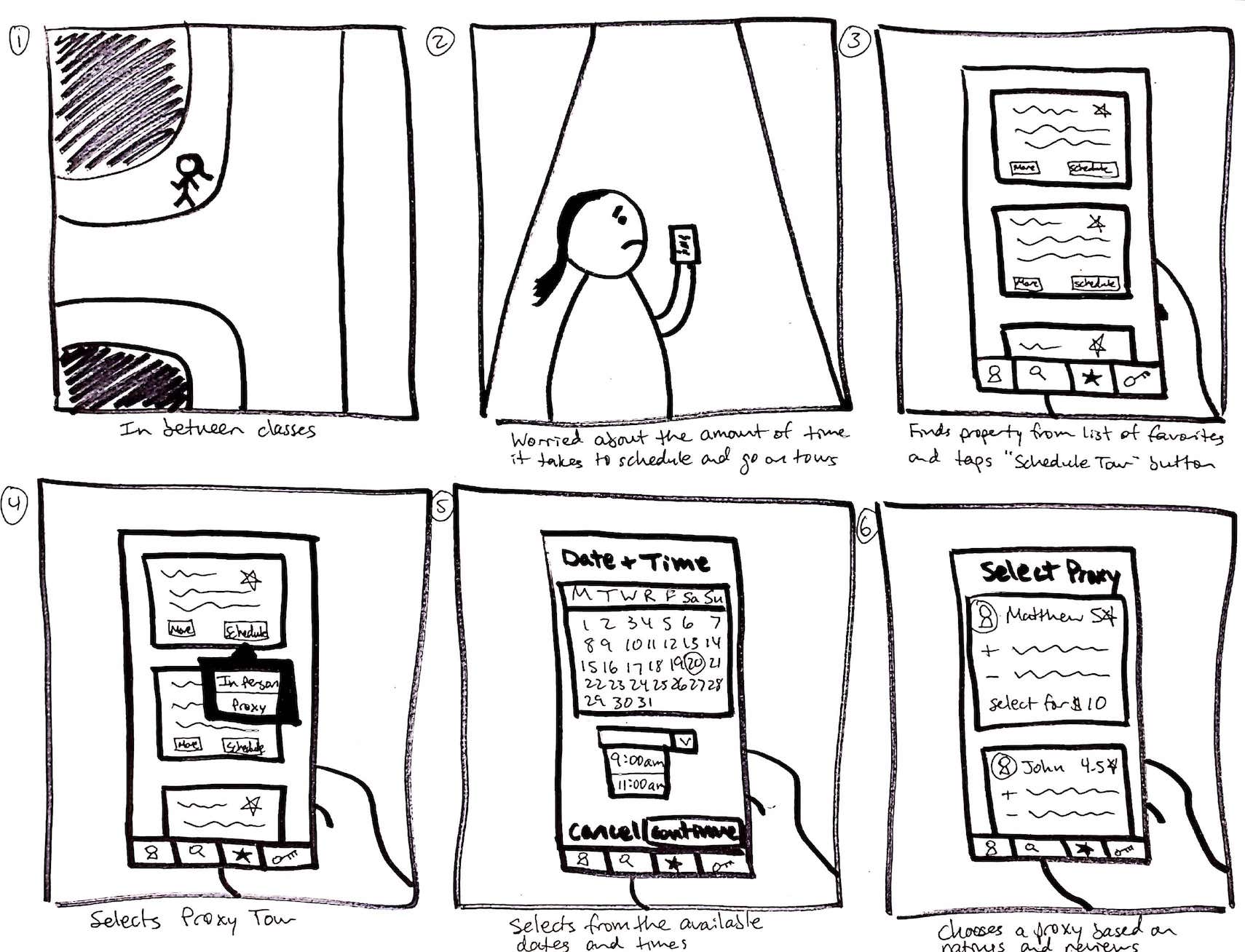 We built a paper prototype so that we could get useful feedback on the way our app works and to find out where any pain points were. I was responsible for facilitating one of the 3 user testing sessions.

User Feedback
From the 3 user testing sessions we received the following critical feedback:

We also received positive feedback on features that the users liked:

For the Mid-Fidelity Prototype we made some changes based on the user feedback and created it using Balsamiq:

Mid-Fidelity Prototype Feedback
We presented our Mid-Fidelity Prototype to the class and received a lot of helpful feedback which we incorporated into our final design. Specifically, we were told that the process of setting preferences was extremely tedious and would cause users to quit the app before using the main features. In addition, there was no way to see contact information for the stand-in.

Heuristic Evaluation
After thoroughly evaluating the app design, we found that the Preferences pages violated many of usability heuristics. In addition, based on feedback from the Mid-Fidelity presentation, we completely revamped the Preferences section.
We redesigned the Preferences section to be divided into 4 sections, and instead of having interview-like questions for each, we made it similar to an online form with checkboxes, multiple choice, sliders, and a map.

Usability Testing
‍We conducted 4 usability testing sessions to make sure our High-Fidelity Prototype didn't have any major issues and was as refined as possible. I was responsible for conducting 2 of them. Because of how thoroughly we sought user feedback at every step of the way, the only changes we ended up having to make were very minor, giving us this final prototype:

Housing Preferences
When first opening the app, students are prompted to enter their housing preferences from which recommended housing options are based off of.
In-Person Tour
Students can schedule in-person tours with different housing offices from a single app.
Stand-In TourStudents can hire someone else to tour various properties for them through a single app with options to ask specific questions, take pictures, videos, or even FaceTime during the tour.

This was a group project for the class INFO 3450 (Human-Computer Interaction Design). My teammates were: Carrie (Jiarui) Hu, Phyllisia Angelia, and Jackson Rong. Together, we won an award for the Best Visual Design during the poster presentation at the end of the semester!
Even though this was only a class project, I think that it could have a really significant impact on the off-campus housing process if it were to be developed. Despite our award, I know that there is always room for improvement and in this case better accessibility. I realize that the color scheme wouldn't pass accessibility compliance and it's something that I've learned to keep in mind going forward.

Since then, I've helped work on the website cornlet.com to meet a very similar need through subletting. 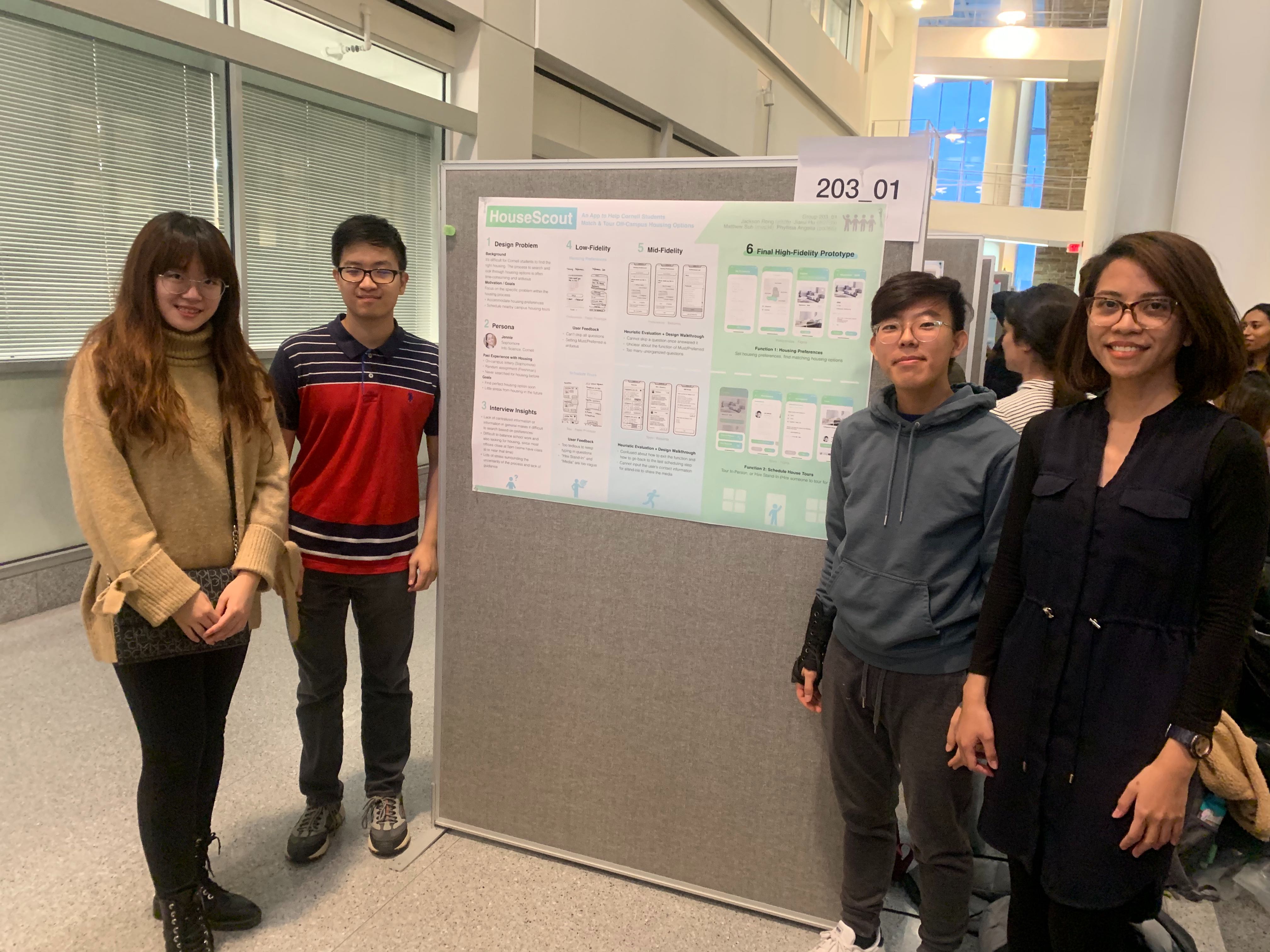 Picture of the team at the poster presentation.
(Left to Right) Carrie, Jackson, Me, Phyllisia
All Case StudiesULXDVantageHouse ScoutNameonicBack to Top